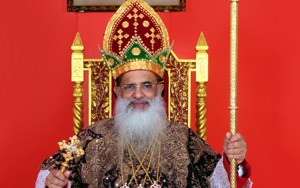 H.H. Baselios Marthoma Paulose II, The Eighth Catholicos of the East in Malankara (2010–2021)

His Holiness had been called to the eternal abode on 12 July 2021. His mortal remains is interred in the Chapel at Catholicate Palace, Devalokam, Kottayam, India.