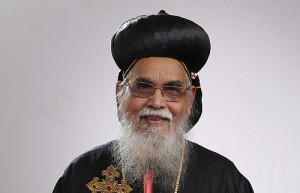 His Grace was born in 1936 at Nellikkal, Koipram Village in Thiruvalla Taluk as the second son to Perumethmannil Mr PK Mathai and Mrs Sosamma.  He has one brother and two sisters.  He belongs to Koorthamala St.Mary's Orthodox Church in Chengannur  Diocese.

He became a priest in 1964 after his studies at Orthodox Theological Seminary, Kottayam. He was also a member of St Basil Daya, Pathanamthitta. His Grace also served the Thumpamon Diocese as Secretary of Priests, Thumpamon Diocese. He was ordained a Bishop in 1991 and was given charge of the newly formulated Sultan Battery Diocese.  And is serving it with all vigour and enthusiasm. His spiritual strength has helped the diocese to grow in all aspects within a short span of time.

His Grace is actively involved in many social activities. He is the President of a special school for mentally challenged children--Olivemala and Baselious Gregorios Mercy Home.  He has so far extended helping hands  poor  and  also runs a secret fund and educational fund for the economically weaker sections.

His Grace has many published articles to his credit. He is known for his simplicity and sweet voice.Presently he is serving the Thumpamon Diocese as its Metropolitan