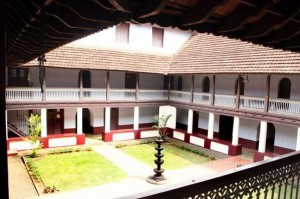 The Orthodox Theological Seminary Kottayam, popularly known as Old Seminary (Pazhaya Seminary) which completes 200 years of witness to true orthodoxy holds a unique place in the cultural history of the Kerala in South India. The history of the Seminary is part of the saga of the heroic struggles of the ancient Orthodox Christian community to preserve its identity, strengthen its spirituality and promote its ideals.

It is unique for more than one reason. The Seminary was:

It has been the living witness and forum of action for many great events in the history of the Malankara church. As the headquarters of the Syrian Orthodox Church of Malabar since the 19th century and as the seat of its chief metropolitan called Malankara Metropolitan and later on Catholicos, the Seminary has become a focal point in the chronicle of the ancient Orthodox Church in India.

The Seminary owes its origin to the far sightedness of Pulikkottil Ittoop Ramban (Joseph Ramban), a learned monk from Kunnamkulam who carried out with singular courage a major decision of the Church made at Kandanadu in 1809 to institute a school of theology (Padithaveedu) in the South of Kerala. The foundation stone was laid on February 18, 1813 and the construction completed by 1815. The Seminary pays due homage and is ever grateful to Gowri Parvathy Bhai, the Queen of Travancore and Col. John Munroe, the then British Resident for their unreserved support toward the initiative. The queen granted the tax free 16 acre property, Rs 20000, and the necessary timber for construction.The structure of the Old Seminary Building is called “Naalukettu”translated into English as ‘central-quadrangle’.

The beginning of the Seminary synchronized with the coming of theChurch Missionary Society (C.M.S) Missionaries to Kerala. The initial years witnessed cordial cooperation between the missionaries and the Church. The missionaries were allowed to teach English and biblical languages in the Seminary. The early missionaries who worked here -Norton, Baker, Bailey, and Fenn rendered remarkable service. Initially called Cottayam College, the Seminary was not exclusively meant for priest training. It was a seat of English general education in the State of Travancore. In course of time it even came to be known as Syrian College. The students were taught Hebrew, Greek, Latin, Syriac and Sanskrit over and above Malayalam along with Theological subjects.

The Cottayam College remained closed for a short span of time in the mid 1800s owing to disputes and litigation between the Church and the CMS missionaries. However, in 1887 functions rejuvenated under the blessed guidance of Mar Gregorios of Parumala and later Mar Dionysius of Vattasseril, Konat Mathen Malpan, Cheriyamadathil Scariah Malpan, Fr. Skaria Elavinamannil, Fr. Alexander Mattakkal, etc… As per the decision of the Malankara Association in 1931, the training program of the Seminary was shifted to a new campus in Kottayam town in the name MD Seminary, named after Mar Dionysius. From 1933, the Seminary course came to be organized as a four year program under the leadership of Cheriyamadathil Scariah Malpan and Fr. K. David. In 1937, the course was once again shifted to the current campus, thus giving way for the name Old Seminary (Pazhaya Seminary).