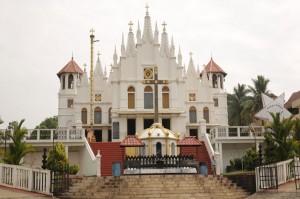 This ancient church renowned all over the world as "PUTHUPPALLY PALLY" or "PUTHUPPALLY VALIYAPALLY" situated on the eastern bank of the rivulet Kodoorar and beside the Puthuppally - Changanacherry road about a kilometer away from Puthuppally junction was rebuilt, expanded or renovated five times during the past four and half centuries of its existence. It was originally built as a "kochu pally" (Chapel) in the name of St.Mary in AD 1557 near Vazhakulam Hindu temple on a hillock which later came to be known as Kochupallikunnu. Eight decades later in AD 1640 it was shifted and rebuilt in the name of Mar Bahanan Sahada at Elamthuruthi Kunnu, the present location. A century and a decade afterwards in AD 1750 the church was rebuilt in the name of St.George, retaining the main portions of Mar Bahanan Church. This church rose to glory and fame as a centre of solace in the succeeding 250 years by the grace of God and the blessings of St.Mary, St.Bahanan and St.George. The church was rebuilt and consecrated in AD 2003 transforming it into a composite shrine of three churches. The church of St.George was retained and the verandas on either side of it were replaced by a chapel in the name of St.Mary on the north side and a chapel in the name of St.Bahanan on the south side. It was a marvelous idea by which the St.Mary’s chapel of 1557 and St.Bahanan’s church of 1640 were revived and rebuilt on either side of St.George’s church of 1750. The main altar of St.George church is in the name of St.George and those on the left and right are in the names of St.Thomas and St.Gregorious of Parumala respectively. The main altar of St.Mary’s chapel is in the name of St.Mary and those on the left and right are respectively are in the names of Morth Shmooni and Mortha Yulithi. The main altar of St.Bahanan’s chapel is in the name of St.Bahanan and those on the left and right are respectively in the names of St.Vattasseril Geevarghese Dionysius and His Grace Kuriakose Mar Gregorious of Pampady. Thus there is the presence and blessings of nine intercessors in the new shrine. Devotees throng the shrine irrespective of religion, caste and creed, to make their supplications before St.George who never fails to respond. Thousands visit the church throughout the year and particularly during the feast of St.George, including the 10 days preceding and succeeding it. The present shrine was declared as the "GEORGIAN PILGRIM CENTRE OF THE EAST" by His Holiness Baselious Didymus-I Catholicos of the East in the year AD 2007.